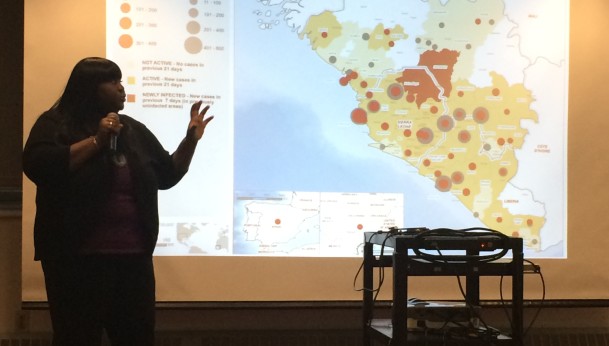 In early November of 2014, members of the NYU community came together to see if their creative thinking could help “hack” the Ebola outbreak and provide government leaders and health professionals with new solutions for containing the disease’s spread. This hackathon was organized by The Greenhouse and the Design Tinkering Club at NYU Polytechnic School of Engineering in response to the challenge issued by USAID in conjunction with the open innovation platform OpenIDEO.

“For me, Hack Ebola @NYU is an illustration of how a community like OpenIDEO is not only the online platform, but all the physical meet-ups, workshops and hackathons that are organized, ” said Associate Professor and Design Tinkering Club Advisor, Anne-Laure Fayard. “It was exciting to see the Hack Ebola team jump on the idea when I sent an email one evening just after the launch of the Fighting Ebola challenge on OpenIDEO: ‘Hey, what do you think of organizing a hackathon to prototype some ideas?’ The answers came in seconds and were positive and they just made it happen in a couple of weeks.”

The 45 people who participated on six teams at the hackathon included “student programmers, data scientists, medical experts, and industrial designers,” said Rishi Jasapara, a Design Tinkering Club member and event organizer. Top projects from the hackathon were shared on OpenIDEO, and include an Ebola hotline with automated messages on prevention, care, and burial, and an Ebola data visualization project that maps patterns to identify and direct resources to hot spots.

One project, Jasapara added, actually had no members with tech backgrounds but still came up with an innovative solution. The CHANCE II Bucket can be used by Ebola patients until they can make it to a medical facility. The bucket has three compartments—cleaning, prevention, and treatment—and each compartment contains visual instructions on how to use the kit until medical care is available.

Another project, SMSanté, also had members who don’t strictly work in technology. Pamela Wu is a Ph.D. student at The NYU Sackler Institute who works at the Center for Health Informatics and Bioinformatics (CHIBI). Her project partner, Arnav Sood, is a first year student at the College of Arts and Sciences, pursuing a joint major in Economics and Mathematics. SMSanté allows people traveling or officials trying to map the epidemic to find out via text message in French whether Ebola has been confirmed, and the proximity of the most recent case.

Aissata Camara, an NYU Wagner alumni and co-founder of the There is No Limit Foundation explained to participants at the hackathon that SMS was the best technology to use. “When there is a problem many peoples’ first instinct at these events is to create an app,” she said. “I was able to give [participants] the cultural context so they could understand [that] certain things wouldn’t work. I helped them realize the best technology is SMS technology.”

Camara’s foundation fights poverty, gender inequalities, and diseases, and is part of a West African task force to fight Ebola. Camara, who is from Guinea and still has family there, outlined some of the challenges that doctors and residents are facing: “They cannot map the disease outbreak very well. In one village, they don’t know who has been affected, who has been sick. People often are hiding because of fear. A second problem is lack of information. The population often doesn’t know how to protect themselves.”

The creators of SMSanté will be partnering with Camara’s foundation to put the project to work in Guinea, and have already received a prototyping grant from the Greenhouse. The next step, Wu said, “is to make our prototype scalable with permanent databases and hosting on a dedicated server account so that it doesn’t stop functioning when I shut down my laptop.” They are also in the process of applying for an USAID deployment grant, Sood added.

Anne-Laure Fayard stated, “They put on a very successful event—not only in terms of the energy, the experience of the participants, the quality of the ideas, but also the potential impact with a few teams who are continuing working on their ideas. That last part is really what I am, we are all, excited about: seeing some of these ideas piloted in the field and hopefully being part of the solution.”

Hack Ebola @NYU is one of many different social innovation initiatives that members of the NYU community are organizing across the University.
Madeline Friedman is a writer and editor for NYU’s Global Technology Services (GTS)