The Nominations Are Open! 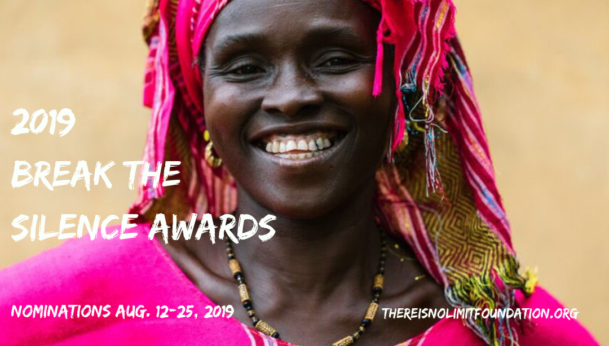 The call for nominations for the 2019 There Is No Limit Foundation Break The Silence Awards is now open. Nominations will close at 11:59pm on August 25th, 2019. Self nominations are allowed. Below are the award categories:

*Lifetime Achievement Award: This award recognizes individuals who have contributed significantly throughout their careers to advance the rights of women and girls and have promoted the protection of human rights.

*Public Servant Award: This award recognizes Public Servants who are using their positions to make a difference in the lives of women and girls and to make ending violence a priority. These individuals are creating policies and using their knowledge and resources to accelerate change.

*Rosie McGrath Activist Award: This award is in memory of Rosie McGrath, a young woman who lived her activism daily and inspired others to do the same. She followed her heart and believed in doing good for others. This award recognizes activists who are working every day to break the silence about harmful practices and abuses. It honors individuals who are creating impact–people who use their resources and talents to achieve a world where women and girls are free from violence and live in dignity.

*Silence Breakers Award: This award recognizes groups and movements using their platform to highlight issues faced by women and girls. These organizations/collaboratives use their collective power to break the silence and take action to advance the rights of women and girls and promote the protection of human rights.

*Susan Gibbs Ally Award: This award celebrates the importance of allies in creating change. It recognizes individuals who are dedicated to amplifying and supporting the movement to end violence against women and girls. These people understand that allies must create and support spaces where survivors and grassroots communities are empowered.

A Selection Committee will review all the nominations and select five (5) nominees across the categories. Selected nominees will receive their awards at the Break The Silence Awards Ceremony scheduled to take place on the margins of the 74th Session of the United Nations General Assembly (UNGA 74) in New York City.